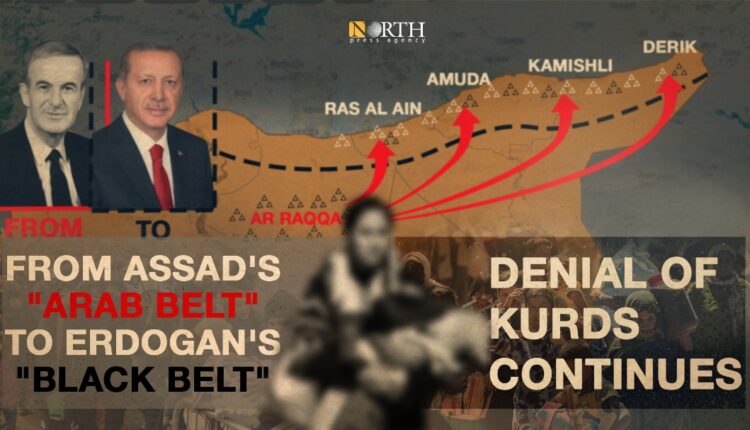 QAMISHLI, Syria (North Press) – Syria’s Kurds have been suffering from decades of ominous demographic change which was first implemented by Syrian government in 1970s, and is now being completed by Turkey.

The project of demographic change against the original inhabitants of Kurds in northern and northeastern Syria dates back to the era of the former Syrian president Hafez al-Assad, father of the current president, Bashar, and the ruling party of Baath which named “Arab Belt”.

What is the “Arab Belt?”

June 24, marks the 48th anniversary of the implementation of the Arab Belt project by the Syrian government in cities, towns and villages in the Jazira region, Hasakah Governorate in northeast Syria, after a decision issued by the Baath Party.

At the beginning of 1960s Syrian intelligence and the ruling Baath Party planned to evacuate the Kurdish-majority areas in northeastern Syria on the border with Turkey from their original inhabitants of the Kurds and push them to the south of Hasakah Governorate, in order to bring Arab families from Raqqa and Aleppo countryside and settle them instead.

The Arab Belt is extended from the Iraqi border, east of the city Derik (al-Malikiyah), to the city of Sere Kaniye (Ras al-Ain, which is now under the occupation of Turkey following a military invasion in 2019), north of Hasakah.

On November 12, 1963, an officer of the Political Security Branch of the Syrian intelligence named Muhammad Talab Hilal presented a research on the national, political and social situation of the Hasakah Governorate. The research focused on the Kurds, describing them as non-patriotic and not loyal to their homeland, Syria.

Hilal proposed to bring loyal Arab tribes from other regions to settle them on the border strip with Turkey and Iraq, from Sere Kaniye (Ras al-Ain) to Derik (al-Malikiyah), and to form an armed militia from the members of those tribes.

The proposal of Hilal remained under wraps until the start of building the Euphrates Dam in Raqqa Governorate in 1974, when the dam lake flooded large areas of agricultural lands, where the Syrian authorities decided to settle the families, whose lands were flooded, in border strip with Turkey with a length of about 350 km long and 10-15 km width.

Those families formed what was later known as the “Arab Belt” which separated the Kurds in Syria from those in Turkey and Iraq.

As a result, about 4.000 families, who were brought from Raqqa and Aleppo Governorates, have been settled in more than 35 housing complexes in the aforementioned area, in a clear step of the demographic change.

To legalize its project of demographic change, the Syrian government issued the resolution No. 521, 1974 which stipulated the redistribution of the agricultural lands, which the government had seized from their real owners of the Kurds, under the pretext of implementing agrarian reform laws.

It established model farms equipped with water, schools, and security protection over more than 700.000 hectares, for more than 4.000 Arab families who have been brought to the area.

Also, the implementation of the project during the era of Hafez al-Assad was preceded by an exceptional survey in 1962 in Hasakah Governorate, during which thousands of Syrian Kurds were stripped of their Syrian citizenship.

The project of the Baath Party denied an eventual existence of a Kurdish language and ethnicity, and supported the shutting down of Kurdish schools.

The demographic change that was launched by Syria’s Baath Party is now being completed by Turkey’s Justice and Development Party (AKP) and its president Recep Tayyip Erdogan. This is clear in the project Erdogan launched during the recent past in the areas occupied by Turkey in northern Syria, including Afrin and Sere Kaniye (Ras al-Ain).

On May 3, the Turkish president disclosed about his plan to settle about one million Syrian refugees in 13 Syrian areas, which are not the areas the refugees are originally from, adjacent to the southern border of Turkey starting from Azaz in the west, to Sere Kaniye (Ras al-Ain) in the east.

“We are preparing a new project for the voluntary return of one million Syrian brothers who are in our country as guests,” Erdogan said.

The Turkish “safe zone” is an area of 30-35 km (19-22 miles) deep into Syrian territory that Turkey started establishing in 2019 to settle Syrian refugees in an area along its border with Syria, as well as to keep it free from the Syrian Democratic Forces (SDF), which it regards as terrorists.

On June 8, Syrians for Truth and Justice (STJ), a human rights organization, published an extensive investigative report in which it revealed details of the demographic change process implemented in Afrin and its countryside by Turkey.

Muhammad Rashid, an IDP from Afrin and a teacher in the University of Kobani, said, “The decision of building settlements in the Turkish-occupied areas aims at making a demographic change similar to the Syrian regime’s Arab Belt.”

Syrian writer and dissident Ali al-Amin al-Swaid said, “Turkey wants to establish a loyal Arab Belt within Syrian territory, which will be easy for it to annex without resistance. Turkey has done its best to create this reality.”

In 2018, Turkish forces and their affiliated armed opposition factions, also known as Syrian National Army (SNA), occupied the city of Afrin and its countryside following fierce battles with the Kurdish People’s Protections Units (YPG), where Turkey claims they are terrorists.

The operation, which was named “Olive Branch”, led to the displacement of about 300.000 of the original inhabitants of the Kurds of Afrin, who are now taking shelter in villages and camps north of Aleppo Governorate, a settled Arab and Turkmen families of the militants of the SNA in the homes of Afrin people and seized their agricultural lands.

In 2019, the Turkish forces and the SNA factions occupied the city of Tel Abyad and its countryside, north of Raqqa, and Sere Kaniye (Ras al-Ain), north of Hasakah, during “Peace Spring” military operation to push away the fighters of the Syrian Democratic Forces (SDF) under the pretext of protecting Turkey’s national security.

This invasion resulted in the displacement of more than 300.000 original inhabitants of the two cities, who are now distributed in dozens of camps in Hasakah and Raqqa countryside. Inside, Turkey has brought the families of its armed factions from other areas and settled them there.

From “Arab Belt” to “Black Belt”

On May 25, the Media Center of the SDF published a story in which it said that insurgent groups including Guardians of Religion (Hurras al-Din) were stationed Afrin countryside, specifically in the villages of Kabbashin and basoutah, south of Afrin, by Turkish intelligence.

The SDF said that militants of Hayat Tahrir al-Sham (HTS, formerly al-Nusra Front) were stationed in the villages of Fafertin, the Yezidi village of Basoufan, and Sheikh Aqil, south of Afrin.

“This comes as a result of a meeting between the leaders of the Turkish-backed militia and the Turkish Occupation in the city of Sarmada, Idlib. The two sides agreed to reposition the HTS mercenaries on the frontlines in the north and eastern countryside of Aleppo and facilitate their movements in the occupied areas of Afrin, al-Bab, and Jarablus,” the SDF said.

The SDF added that “the new distribution of Guardians of Religion and the HTS is part of a Turkish plot to establish a black belt of terrorist organizations in the lines of contact starting from the southern countryside of Afrin to the axis of Manbij and western countryside of Kobani to use these terrorists in any potential aggression.”