HASAKAH, Syria (North Press) – The Islamic State Organization (ISIS) is trying to take out wives of ISIS militants from Hawl Camp in Hasakah countryside in northeast Syria. The women are planned to move to Jarablus in northern Syria to cross to Turkey and then to the countries where they came from.

The governments of their origin countries refuse to repatriate them or every citizen who joined ISIS from camps and prisons run by the Autonomous Administration of North and East Syria (AANES).

The AANES’ security forces have thwarted several attempts of escape, yet few women succeeded to do so. The women managed to cross to Turkey through areas controlled by Turkish-backed Syrian opposition factions, specifically Jarablus city, northern Syria. The women pay thousands of US dollars for escaping the camp and reaching Turkey, ISIS women who also tried to escape told North Press.

The Hawl Camp, which was first established in 1990s to house refugees fleeing the Iraq War, is located near the Syrian-Iraqi border on the southern outskirts of Hawl town in the Hasakah countryside. The Camp, is a house for about 15,650 families in total of 57,516 individuals including 8,049 Iraqi families and 5,153 Syrian ones.

Approximately 15.300 families, including 2.423 families of ISIS foreign fighters whom killed or captured in battlefields are in the camp. The ISIS foreign fighters hail from about 60 countries and hold different nationalities. All have come to Syria to fight for “Jihad”, under calls by the ISIS leader Abu Bakr al-Baghdadi in 2014.

The AANES and the US called the foreign countries to repatriate their citizens in Hawl Camp and those held in captivity to hold them accountable for the crimes they committed, yet the majority of the countries, some of which also participate in the Global Coalition, refuse to return back their citizens.

The AANES called for the establishment for an international court to prosecute ISIS fighters but it has gained no support yet.

In 2021, the AANES handed over 324 women and children who are family members of ISIS foreign militants to their origin country representatives. However, the countries refuse to take the majority of their citizens, especially the men and the adults. 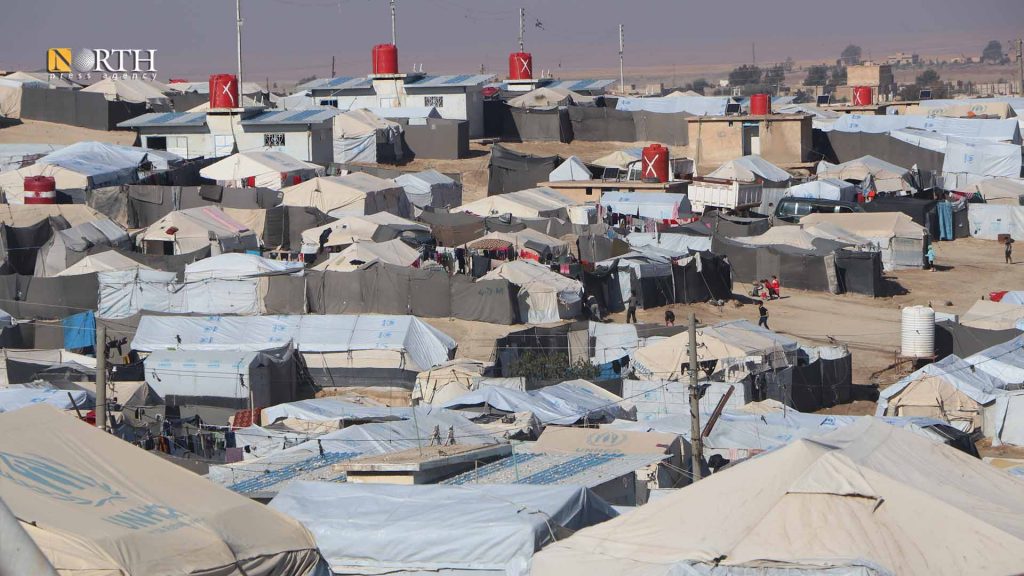 Asma’ Muhammad al-Wadi, a Tunisian 40-year-old wife of an ISIS fighter narrated to North Press details of their unsuccessful escape attempt form the camp accompanied by another Russian woman.

Al-Wadi did not mind talking to North Press without covering her face or even wearing the cloak “abaya”, a religious dress ISIS women usually wear. She said some “sisters” in the camp told her if she was willing to escape, she should first enroll her name in a list. Then some people based in Turkey will arrange and plan the whole escape process, especially for the foreigner women.

The “sisters” refers to non-Syrian ISIS women in the Hawl Camp who consider themselves responsible for applying a notion and do not mind the use of force in order to implement it.

Al-Wadi, who has three children, said a man known as Abu Ahmad who lives in Turkey had arranged the escape process. “Abu Ahmad was communicating with the Russian woman I escaped with”.

In November 2021, al-Wadi, her children and the Russian woman got out of the camp. They hid in a mini-truck designated to bring bread to the camp. “The truck had a hidden box inside,”al-Wadi said.

After passing the administrative boundaries of the camp, the two women and the children got in another vehicle and went to a house where they stayed for five days. The two women withheld to uncover any information concerning the location or owner of the house.

Then, al-Wadi, her children and the Russian woman moved to Raqqa city, and they changed the vehicle more than once during the tour.

On the way to Jarablus, the Internal Security Forces (Asayish) arrested them in the countryside of Manbij.

“We are closely following the dangerous reports on Daesh’ linked groups including Abu al-Qaqa’ group as a network operating in Ras al-Ain area in smuggling civilians into Turkey and get financial benefits for Daesh’s terrorist operations against the population,” the Syrian Democratic Forces (SDF) said in a press release yesterday.

“The international community being indolent with such terrorist groups operating in areas of northeast Syria occupied by Turkey would increase the danger of the terrorist organization and impede efforts to combat the cells,” the press release said.

Women before us did it

In 2020, the Women Protection Units (YPJ) of the SDF with the participation of the US-led Global Coalition established a special jail to hold in ISIS women who do terrorist actions or commit crimes in the camp or who attempt to escape from Hawl Camp.

The women’s prison is currently holding tens of wives of ISIS fighters killed or captured in battlefields. The women are held along with their children and the majority of them are foreign nationals.

Al-Wadi arrived in Syria in 2013. She said she first flew to Turkey, then crossed the borders illegally to Syria to reunite with her husband who came to Syria in 2012.

North Press reporter asked her why she first headed to Jarablus specifically, al-Wadi’s reply was that Jarablus has a camp that shelters the “sisters” and assist them to cross to Turkey then to their homeland.

“Many sisters managed to reach Turkey. They facilitate the return of the women willing to go back home or those want to stay in Turkey without being jailed,” she noted.

Concerning the reason why she came to Syria, al-Wadi claimed it was to apply the rule of Islam.

Al-Wadi claimed she made a mistake by joining ISIS. “My husband worked in communication before working in the services department. He never engaged in a military action,” she alleged.

Al-Wadi calls the Tunisian government to repatriate her and her children to Tunisia. She said her fate is obscure in Syria. “I want to go back home”.

On 25 January 2021, the SDF arrested a man who used to smuggle ISIS wives from Hawl Camp. The man was arrested in Tel Hamis countryside on the Syrian-Iraqi border.

Again in January 2021, the security forces in the camp arrested tens of women along with their children while trying to escape. They were hiding in water tanks.

In July 2020, a video tape North Press obtained from special sources form Hawl Camp, showed drivers of water tanks owned by the Norwegian Refugee Council (NRC) organization while hiding some member families of ISIS fighters to smuggle them from the camp.

Alya Aslan, the 30-year-old Russian ISIS woman, said each she and al-Wadi paid $22,000 for one smuggler to take them out of the camp.

The Russian woman, who speaks little Arabic, claimed she bought a cell phone, contacted her family and asked them to help her got out of the camp. “My mom collected money from some relatives and neighbors and sent them to me”.

She said some other women, including Russians, managed to escape successfully and get to their homeland.

Aslan and her husband came to Turkey in 2013. They stayed there for one year then crossed the border to Syria.

At first, both Aslan and her husband settled down in Raqqa. Later they moved between cities under the control of ISIS. Their final destination was Baghouz town which the SDF and the Global Coalition took control in 2019 and at the end, of the Islamic caliphate was declared.

Aslan claimed she came to Syria because she was looking for an Islamic state where people wear a religious dress and apply Islamic laws (Sharia).

Aslan criticizes her country as saying Russia repatriates only the orphan children who are Russian nationals and disregard our repatriation.