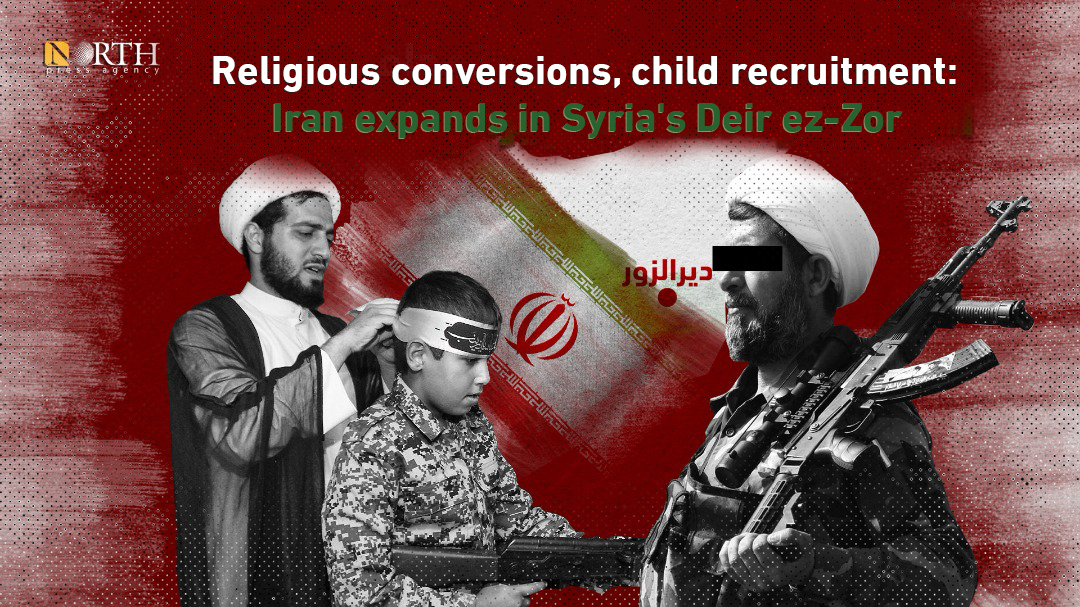 DEIR EZ-ZOR, Syria (North Press) – Muhammad Hammoud (a pseudonym), the head of a family in the countryside of Deir ez-Zor, eastern Syria, was shocked when his two minor children joined the Iran-backed Liwa Zainebiyoun, studying Shi’ite Islamic doctrine and receiving an assignment to an Iranian-affiliated faction.

Hammoud and other parents, however, remained silent after their attempts to search for and demand the return of their young children, as they were threatened by Iranian imams at the Iranian Cultural Center in the city of Mayadin, which supervises the schools for these children.

In the eastern countryside of Deir ez-Zor, west of the Euphrates River, there are approximately 30 centers for Iran-backed groups, most of which are in civilian homes seized by pro-Iranian factions on the accusation that their owners reside in areas held by the Syrian Democratic Forces (SDF) or the opposition factions.

Hammoud said in a voice message to North Press, “They teach my children Iranian chants, accusing Sunnis of heathenism, and teach them the sectarian way.”

Iran is seeking to recruit adults and children into its factions and to spread the culture of Shi’ism by various means and methods, with the aim of increasing its penetration into the east of the country, according to the testimonies of residents of Deir ez-Zor.

Liwa Zainebiyoun consists of hundreds of Shi’ite Pakistani fighters from West Pakistan, especially from the Turi and Bangash tribes. The faction entered the battles in Syria alongside the Syrian government forces in early 2015, with the support of the Iranian Revolutionary Guards.

Two years ago, with the decline of military operations on the ground in Syria, Iranian presence moved from the stage of direct fighting on the ground and participating in the majority of battles to recruitment of a larger number of fighters and loyalists from what remains of government-held areas in the Syrian geography.

Since 2019, Iranian factions in government-held areas in the countryside of Deir ez-Zor have been targeting the residents of the region through blackmail, bribery, and financial extortion.

Saleh Muhammad (a pseudonym), a resident of the city of al-Bukamal on the Syrian-Iraqi border, told North Press that after taking control of the area, these groups relied on recruiting the people of the region to their ranks or spreading Shi’ism within their centers in return for high salaries.

The ages of those affiliated with the Hashemiyoun Center, one of the most prominent recruitment centers in the city of al-Bukamal, ranges from nine to 18 years old, according to Muhammad.

He added that the center has about 400 members who are taught the Shi’ite sect and the Persian language and then employed in government departments to encourage the population to adhere to Shi’ism.

Other centers for spreading Shi’ism and teaching the Persian language are located in several neighborhoods in the city, most notably al-Haggana neighborhood, which has three such centers.

Hajj Ragheb of the Mashahada tribe, one of the first converts in the town, supervises the religious and recruitment centers of the Iranian factions in al-Bukamal, according to Muhammad.

The Iranian factions offer to recruit people who have evaded the Syrian regime’s mandatory military service and use the money to lure them to join.

Liwa Zainebiyoun member Mahmoud al-Ahmed, a resident of the Harabish neighborhood in Deir ez-Zor, who wanted his real name not be published for security reasons, said that he joined the faction in the city of Sayyidah Zaynab in Damascus in 2019 because he wanted to be exempted from compulsory service in the ranks of the government forces.

“A few months after I joined and received religious courses, I was transferred to Deir ez-Zor as a guard at a Shi’ite shrine,” he added.

According to al-Ahmed, Asa’ad al-Issa and his uncle Hazem al-Issa, who are affiliated with the Iranian Revolutionary Guards, are among the most prominent officials responsible for promoting Iranian factions in the city of Deir ez-Zor.

Iranian-affiliated factions began their penetration into the countryside of Deir ez-Zor after taking control of the city and its countryside west of the Euphrates River in 2017, after battles with militants affiliated with the Islamic State (ISIS).

After establishing their presence, the factions sought to attract the people of the region, by converting most of the mosques into husseiniyas (Shi’ite religious buildings) and other Shi’ite centers, according to residents.

The majority of recruitment and affiliation centers are located in the seized homes of civilians, and there are four centers for teaching the Persian language near the public park, the Zahra neighborhood, Jamia’at and al-Haggana in the city of al-Bukamal.

There are six main centers in the city of Mayadin, 40 km east of Deir ez-Zor, most notably the Amr Ibn al-Aas Mosque, which the factions turned into a husseiniya, al-Buwaihyun Center, and the center for Liwa Fatemiyoun, which is supervised by a general official called Hajj Hussein, who hails from the city of Kafr Nubl in the countryside of Idlib. A number of brokers from the people of Mayadin follow him, according to Ahmed.

The largest center for teaching Persian and Shi’ite religious doctrine, the Iranian Cultural Center, is located in the central park within the city of Deir ez-Zor, and has branch offices in the neighborhood of Harabish, Hattla, Muratt and al-Qusour in the city.

The Iranian Cultural Center is one of the most attractive centers for the population, as it provides activities and periodic financial rewards in addition to direct coordination with some of the security agencies of the Syrian government.

While the number of affiliates in al-Mayadin is about 8,000, however, the number is increasing on a daily basis, as the centers are witnessing a great turnout, according to a military source from the Hashemion faction.

The same source added that the salaries differ from one faction to another and according to the age, as those who are affiliated to learn the Persian language and the Shiite sect receive about 150,000 Syrian pounds per month.

As for those affiliated with the factions, their salaries reach $200, according to members.

Juma’a Abdulkarim, a resident of the town of Hattla, 5 km east of Deir ez-Zor, said that the Sheikh brigade, which includes elements from Deir ez-Zor in addition to different nationalities, Pakistani and Iraqi, supervises the protection of Shiite and affiliation centers in the town.

He added that they attract children and even adults to the centers and give them courses to teach the Persian language, such as ‘the jurisprudence of Ahl al-Bayt doctrine, under the supervision of Iranian teachers.

These centers are trying to win over the population as a popular incubator, taking advantage of the deteriorating living situation in the town by distributing food baskets, holding activities and competitions for children, and offering them financial rewards.